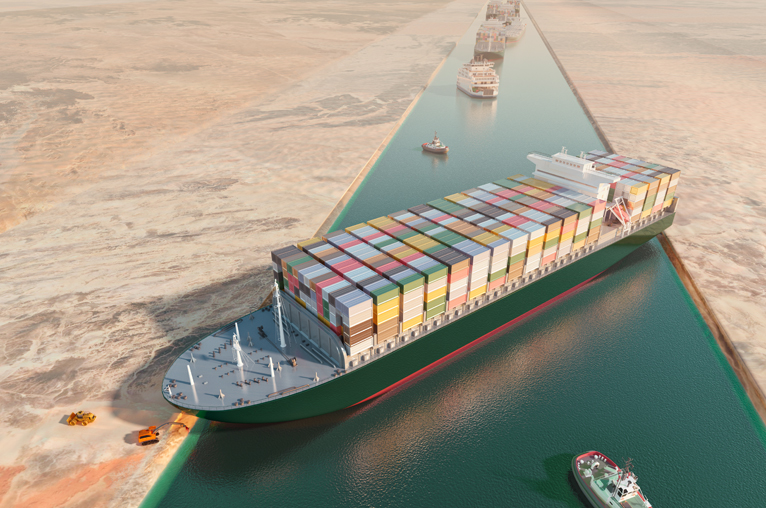 The blockage of the Suez Canal at the end of March was the subject of extensive media coverage. The public suddenly became aware of the vulnerability of production and transport chains. Impressive images of a (relatively) small excavator next to the bow of a gigantic, stranded container ship, in combination with statements about the ‘tsunami of containers’ en route to Rotterdam, attracted a lot of attention.

Looking back, it is dangerous to say that ‘it wasn’t really that big a deal’. On the contrary: it is actually due to a fast and adequate response, with digital technologies, that problems were averted. Just like the real-time sharing of data actually prevents problems on an almost daily basis. It is with good reason that Portbase immediately launched a web page that allowed for the ETA of the various delayed ships to be continuously monitored in response to this situation.

Any party operating between the deepsea ports and the hinterland, such as a barge operator, for example, knows that there are uncertainties that can disrupt the planning for the timely handling of (intercontinental) cargo. Think of unfavourable water levels on the rivers, strikes, traffic jams or congestion at deepsea terminals – just to name a few challenges.

No influence on the weather
As Modality, we have no influence on the weather, water levels and any labour disputes that may occur in the port. However, we do set up our software in a manner that allows for the supply chain to be monitored as accurately as possible and for disruptions to be immediately and proactively identified. This is only possible with an optimal exchange of data.

Delays at the deepsea terminals (‘congestion’) have less impact on barge operators if information is known and shared in a timely manner. From berth availability to time slots for handling, from delays at sea to water levels on the Rhine: the nautical journey between seaport and hinterland can often be planned more accurately than transport across a section of road – provided that parties properly share and process information. Modality is the hub for the sharing of that data, as is the case for Hinterland Container Notification (HCN), for example.

HCN and integrated planning
Calls involving barges and containers are pre-notified at terminals and depots via a single portal with HCN Barge. In addition, HCN Barge provides input for the integrated planning of each port visit. This yields important benefits, such as a uniform working method for all terminals and depots and the possibility to request the container status prior to the pre-notification.

Various measures
Changes in planning due to congestion will continue to occur. Fortunately, the problem is addressed in several ways. Firstly, physically: through the construction of additional berths for inland vessels.

Furthermore, it is the larger parties who, on the basis of fixed window agreements at the deepsea terminals, try to minimise delays in the seaport.

For parties that do not have sufficient volumes to make such agreements, the establishment of the Barge Transferium Maasvlakte (BTM) has constituted a welcome improvement.

BTM is a collaboration between Hutchison Ports ECT Rotterdam (ECT) and a consortium of inland terminals and barge operators. In this collaboration, ECT makes a section of quay with crane and crane team available to the consortium on prearranged days and times at a fixed rate.

At BTM, the barge operators take care of the planning themselves and the participating parties consult with one another as to when and how often they will moor alongside the quay. For this initiative, the digital sharing of data is also essential in order for the aforementioned ‘mutual consultation’ to succeed.

API
Modern systems use so-called APIs (Application Programming Interfaces) to exchange data. The main benefits of this technology are speed and standardisation. The data that is offered within the API is immediately available to all users in the chain who are technologically willing and able to make use of it.

It is precisely a crisis such as the Suez blockage that clearly illustrates the benefits that digital data can deliver to the chain parties. Modality shares and processes the data for you, so that your customers are not or hardly affected by disruptions.

Do you want to know what sharing and processing data means for your organisation? We would be happy to explain the possibilities in a personal meeting. You can contact us directly via the button below.