Combined Cargo Terminals Moerdijk (hereafter CCT Moerdijk) is an important link in one of the most successful partnerships in combining container shipments to the hinterland: the West-Brabant Corridor. A partnership with many benefits for the partners and their clients and a substantial contribution to reducing congestion in the port of Rotterdam. In this article Peter van Veelen tells us about the establishment of the West-Brabant Corridor, the improvements as a result of the cooperation and he also reveals the secret behind the joint success.

More efficient handling
CCT Moerdijk was established more than sixteen years ago. With stevedoring as its main economic activity, CCT Moerdijk has grown into an organisation employing some 120 people and with 32 hectares of land and 1,500 metres of quayside. CCT is an inland hub between seaport and hinterland accessible by water, rail and road. In addition, CCT Moerdijk also handles sea-going vessels and offers breakbulk operations. These include different types of project cargo such as wind turbines, big bags etc. Within its intermodal role, CCT Moerdijk has entered into cooperation with BTT and OCT . As central planning takes place at the Moerdijk location, CCT is the pivot of the West-Brabant Corridor. One of the most successful initiatives in combining cargo to ensure more efficient handling of container flows to the hinterland.

Increasing congestion
The increasing congestion in the port of Rotterdam led to talks on possible partnerships as early as 2008. Peter: “Our ships were underway for about four to five days due to the lack of sufficient volume to make point-to-point connections. A delay in the first stop often caused a negative domino effect in the rest of the arrangements for loading and unloading. Not only does this take a lot of time, it also increases the risk that customers lose confidence in your barge service.” At the time, a lack of confidence and a declining market meant that cooperation did not get off the ground. In 2017, talks were resumed and the owners of CCT Moerdijk, Barge Terminal Tilburg (hereafter BTT) and Oosterhout Container Terminal (hereafter OCT) came together to compare individual volumes. These turned out to match well. Peter: “We then entered into a dialogue with the sea terminals and sought cooperation with the Port Authority. As more parties got involved, confidence got bigger and the sea terminals offered commitment to fixed windows”.

Pioneers
Directors Wil Versteijnen and Luc Smits felt that developments were lacking and in January 2018 they decided not to wait any longer and make a start. The planners, at that time still at the Tilburg location, were faced with a major change in working methods. Not only were volumes many times higher, also other sailing methods were introduced (windows, point-to-point sailing). However, within six weeks the first structures became visible, agreements were expanded and sailing schedules adjusted. In June of that year, OCT joined the corridor and the decision was taken to work from one central point and with a central system. The planning department moved to Moerdijk and Modality provided the central WBC system with a very modern interface technology between WBC central and the Modality systems of partner terminals CCT, BTT and OCT.

“When we joined forces, reliability increased and our services were improved. In addition, the performance of our vessels was better.”

Higher reliability, better performance
Combining the volumes of CCT, BTT and OCT allows us to sail dedicated routes between the sea terminals and the hinterland terminals. The first effects of the initiative are obvious. The Port Authority reports significant reductions of port-stay times of vessels and clients’ reactions are also mainly positive. Peter: “When we joined forces, reliability increased and our services were improved. We also see improved performances of our vessels. We measure the capacity utilisation, the handling time at the terminals and we make sure that everyone keeps to the agreements that were made. In the short term we are still seeing an increase in the cost price. We see this increase as an investment in the service and reliability of our services. In the long term, high reliability will contribute to higher volumes and a decrease in cost price”.

Including Alpherium
Recently the terminal in Alphen aan den Rijn, better known as the Alpherium, has joined the network. The limited draught on the Moerdijk – Alphen aan den Rijn route means that only smaller vessels (and therefore smaller volumes) can be used. By transshipping the containers at the Moerdijk Hub, the Alpherium benefits from combined volumes and experiences less congestion in the port of Rotterdam. In addition, in collaboration with Heineken, a project is now underway to fill the empty export containers with empty beer bottles that are taken to the factory in Zoeterwoude. The glass factory that produces the beer bottles is located next to the terminal in Moerdijk. By filling the empty export containers from Rotterdam with empty bottles in Moerdijk, the road kilometres between the Heineken factory in Zoeterwoude and the glass factory in Moerdijk are limited to the Alphen – Zoeterwoude route. As about seven trucks drive up and down every day, the shortening of the route means a considerable CO2 reduction and less empty transport. 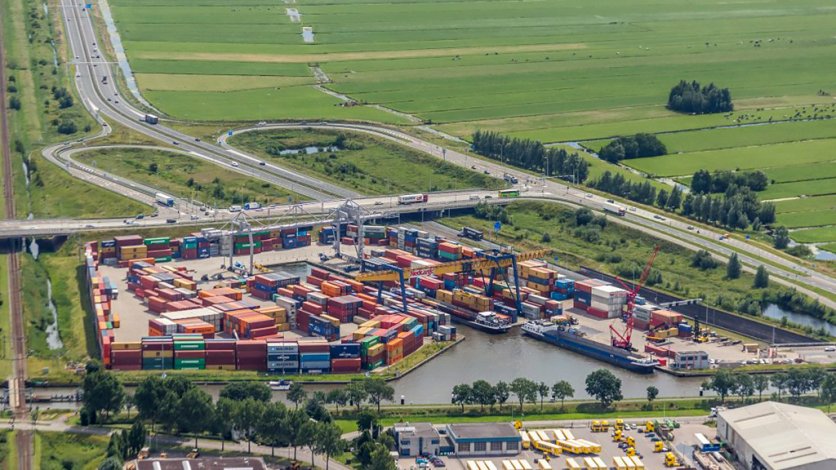 “Sometimes you have to step over your own shadow and get round the table with your competitor.”

The secret behind the success
Not all partnership projects are as successful as the West-Brabant Corridor. When we ask Peter about the secret behind the success, he says: “Trust is important. Sometimes you have to step over your own shadow and get round the table with your competitor. The client’s interest should outweigh the interest of the competitor. You have to be open to working with your competitor. At the moment, we are the only corridor that has entered into a partnership with joint planning in a joint system. This level of cooperation will lead to maximum efficiency to get the most out of the partnership.

Next steps
The next step in optimizing barge services will be the automation of planning. Planning containers on the most efficient lighter is still a manual job. In addition, CCT Moerdijk wants to further develop in the field of Artificial Intelligence. Further automation will support and simplify work processes as much as possible. Also, a renovation of the quay is planned and the rail terminal will be extended from two to three tracks to comply with the new train length guidelines.

Would you like to know more about the automation and technology that contributed to the success of this collaboration? Please, contact us and we like to give you an inside view.