By the 31st of December of this year, all intermodal carriers must have switched to Portbase’s Hinterland Container Notification (HCN). The interface with HCN Barge in particular ensures that manual actions are no longer required when pre-notifying barge calls and that container status information is available much faster. HTS Intermodaal has been involved with Nextlogic for ten years already and has played a crucial role in the development of the HCN Barge API in its capacity as pilot customer. In this article, Vincent Heuvelman (ICT Manager) and Benjamin Megchelsen (Customer Service) talk about the development process of the HCN Barge API. We discuss what the development entailed, the benefits this has yielded and the progression of the internal implementation process of the API.

Reliable partner for inland container shipping between seaport and hinterland
With a fleet of approximately 30 vessels, HTS Intermodaal provides container transport by inland barge from point to point and from seaport to front door. High frequencies combined with fixed sailing schedules make HTS Intermodaal a reliable carrier between seaports and hinterland. As a frontrunner, HTS Intermodaal has been involved in the development of Nextlogic and HCN Barge and has provided Portbase and Modality with valuable input for the successful implementation of the HCN Barge API.

Benefits of using MCA Barge API
Making use of the HCN Barge API offers a number of significant benefits. The HCN Barge API makes it possible to both make terminal agreements and exchange container data directly from the Modality system. The HCN Barge API replaces the COPINO messages and ensures a much faster exchange of data. Furthermore, the data exchange between terminals and barge operators is much more comprehensive. Not only is it possible to directly pre-notify barge calls via the API, for example, but documentation, pin codes, availability, expected unloading date and customs blocks are immediately visible in the Modality system as well. Container (status) information and call and rotation data can be directly submitted to Portbase without needing to log in on separate web screens. 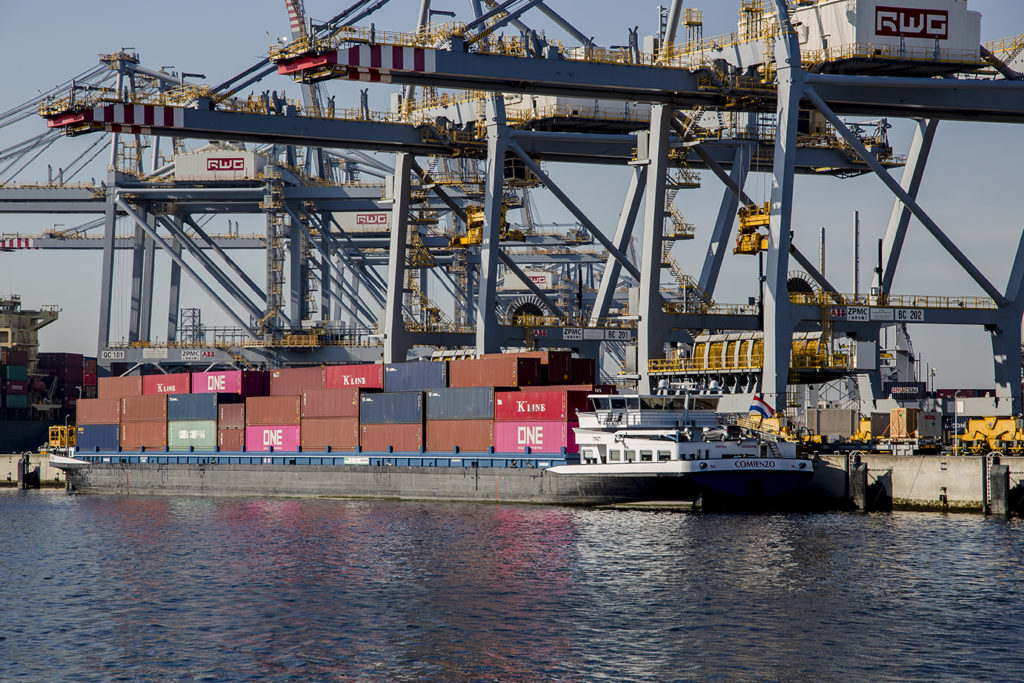 Development HCN Barge API and internal implementation
HTS Intermodaal has already been successfully using the HCN API for some time. This took quite some work though.

Vincent: “The entire development process of the HCN Barge API in collaboration with Modality and Portbase took about a year, from the drawing board phase to the moment the pilot version was delivered. The preliminary phase in particular was very intensive. It took quite some time before the right people sat down together and all the API specifications were established. When the test phase commenced, Portbase and HTS coordinated almost hourly regarding the do’s and don’ts of the design of the Portbase system. After that, we were able to add additional fields fairly quickly and incorporate them into our own Modality system. We went live almost immediately after the pilot version was launched.”

Following the go-live of the pilot version, the API was implemented internally. Benjamin is responsible for the internal implementation and mentions that internally, it also took a while before the team was fully familiar with the new way of working.

Benjamin: “Especially in the initial phase, the planners of HTS were still somewhat reluctant to fully rely on the data that was collected via the API. For example, the Portbase website and the websites of deepsea carriers regularly showed differences, which led to a lack of confidence. After regularly comparing the data in the internal system with the data via the Portbase web screens for about three months, the confidence was there and the data in the Modality system became leading.”

API HCN 2.0
For HTS Intermodaal, the main condition in the development of the HCN Barge API was the ability to run customer service checklists. On the basis of these overviews at the trip level, colleagues can immediately see any matters that are not yet in order and require attention. Now that the first phase has been successfully completed, the development of API HCN 2.0 is on the priority list to anticipate the next steps in the development of HCN Barge.

Vincent: “We are currently working on the further optimisation between Nextlogic and HCN Barge. For example, Nextlogic does not yet optimally take into account the internal transport of containers within the port and the prioritisation of reefer containers.”

The Modality system of HTS Intermodaal communicates with many different systems. In recent years, cargo flows have increased to such an extent that the rapid and integral sharing of detailed information within all these systems is increasingly gaining in importance. Despite the fact that HTS has already realised many EDI interfaces, a lot of data is currently still being exchanged by e-mail. This exchange of data must be further automated in the future and more data needs to be shared at the detail level as well. HTS also has the option of making certain relevant transport data available to its customers via its own client web portal.

Connection and pre-notification costs HCN
As of the 1st of July 2022, Portbase will charge a fee for the use of HCN. This entails connection costs, a fixed monthly fee and a contribution per pre-notification of a full container. For more information about the costs of and participation in HCN, please consult the Portbase website.

As stated previously, all intermodal carriers must be connected to HCN by the 31st of December 2022 at the latest. This applies to HCN Barge, HCN Road and HCN Rail. Not yet connected? Please contact us as soon as possible to schedule the integration!